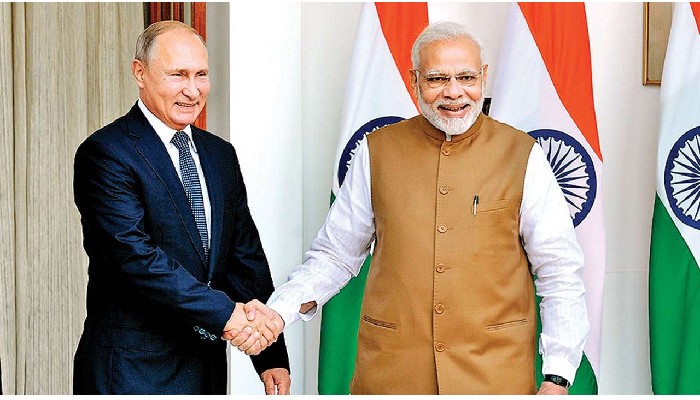 The summit is an annual event held alternately in India and Russia, but is happening this time after a break, the last being held in 2019

Russian President Vladamir Putin and Prime Minister Narendra Modi will meet in New Delhi for the 21st India-Russia Annual Summit to be held on Monday.

“On December 6, the 21st annual India-Russia Annual Summit will be held and we look forward to welcoming President Putin to New Delhi for the Summit,” Spokesperson of the Ministry of External Affairs Arindam Bagchi said during his weekly press briefing on Thursday.

“The leaders will review the state and prospects of bilateral relations and discuss ways to further strengthen the strategic partnership between the two countries. The summit will offer an opportunity to exchange views on regional, multilateral and international issues of mutual interest,” he stated.

A Joint Statement is proposed to be issued at the end of the Summit which will encapsulate discussions, understandings and agreements signed during and also in run up to the summit, the MEA Spokesperson informed.

Noting that other than the India-Russia Annual Summit, there will be a series of meetings on December 6, Bagchi said, “We foresee a very intensive engagement during the day and culminating with the summit.”

The day will begin with Defence Minister Rajnath Singh and his Russian counterpart, Sergey Shoygu, co-chairing the India-Russia Inter-Governmental Commission on Military Technical Cooperation (IRIGC-MTC) in the morning, the MEA Spokesperson said.

On Monday, External Affairs Minister S Jaishankar will have a bilateral meeting with his Russian counterpart Sergey Lavrov, Bagchi added.

These meetings will be followed by the inaugural meeting of the newly instituted India-Russia 2+2 dialogue mechanism between the Foreign Ministers and the Defence Ministers, he added.

“Both ministers are expected to discuss bilateral, regional and international political and defence issues. Such a format we have with very few countries,” he noted.