India is committed to strengthening EAS as an ASEAN-led organization: MEA 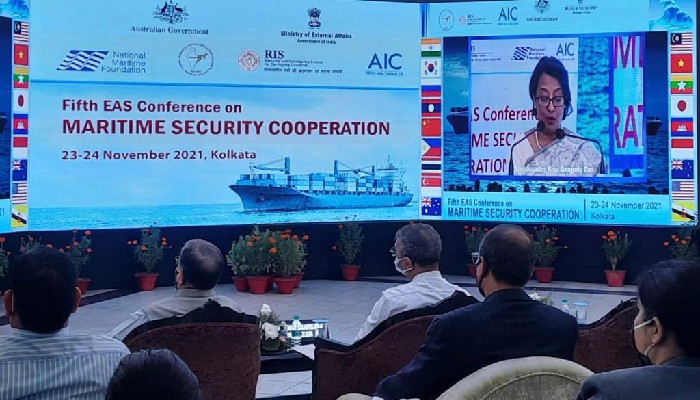 India envisages a free, open, inclusive and rules-based Indo-Pacific with respect for sovereignty and territorial integrity of all nations in the region, peaceful resolution of disputes, avoidance of use or threat of use of force, and adherence to international laws, rules and regulations, MEA Secretary (East) Riva Ganguly Das said on Tuesday.

Speaking at the 5th East Asia Summit Conference on Maritime Security Cooperation in Kolkata, she said Indo-Pacific Oceans Initiative, based on the vision of the Indo-Pacific, is an open and non-treaty based initiative which doesn’t envisage creating any institutional framework.

“It has seven pillars for cooperation and collaboration namely Maritime Security, Maritime Ecology, Maritime Resources, Capacity Building and Resource Sharing, Disaster Risk Reduction and Management, Science, Technology and Academic Cooperation and Trade, Connectivity and Maritime Transport with an aim to fulfill the overarching and converging interests in the Indo-Pacific,” she said.

Stating that India as a nation is deeply committed to strengthening the EAS as an ASEAN-led organization, she said, “New Delhi continues to contribute positively to the EAS goals including maritime security cooperation.”

“We are happy to have valuable platform of the EAS to take forward the objectives envisaged in IPOI and discuss the issues of common interests and address the common challenges in domain of Maritime Security together,” she maintained, adding that the conference aims for practical and result-oriented cooperation among the EAS participating countries within existing architecture and initiatives, while also exploring new ideas of maritime cooperation.

The MEA Secretary said that since the ‘centre of gravity’ of global growth is shifting towards Indo-Pacific region, maritime challenges like piracy, smuggling and trafficking IUU fishing, misuse of marine resources, increase of marine pollutant particularly plastics. All these have increased the urgency of a cooperative and collaborative approach from all EAS participating countries.

“We are also working with the EAS countries to enhance discussion and deliberations on specific areas of common interest in the maritime domain in the region. India, Australia and Singapore will be jointly organising EAS Workshop on “Marine Pollution especially Marine Plastic Debris” and India and Singapore are jointly organising EAS Workshop on "IUU Fishing”, both in early 2022,” she added.

Riva Ganguly said, “Oceans have played an important part in India’s history right from the time of the Indus Valley Civilization. Based on our civilizational ethos that sees the seas as an enabler of shared peace and prosperity, in 2015 Prime Minister Narendra Modi put forward the SAGAR Doctrine - an acronym for ‘Security and Growth for all in the Region.”

“This vision focuses on cooperative measures for sustainable use of the oceans, and provides a framework for a safe, secure, and stable maritime domain in the region. These, together with India’s commitment to UNCLOS and customary law of the seas, provide a direction and a framework for efforts to enhance public good in the broader Indo-Pacific,” she said.

In August 2021, India, under its presidency of UNSC hosted a High-level Open Debate on ‘Enhancing Maritime Security – A Case for International Cooperation which was chaired by Prime Minister Narendra Modi.

“A comprehensive approach to Maritime Security should protect and support legitimate maritime activities, while countering traditional and non-traditional threats in the maritime domain. We bring in the same spirit through this conference,” the MEA Secretary added.

The EAS is a premier Leaders-led forum to exchange views on strategic issues in the Indo-Pacific. Since its inception in 2005, the EAS has been playing an important role in addressing both traditional and non-traditional security challenges in the region, including in the maritime domain of the Indo-Pacific.