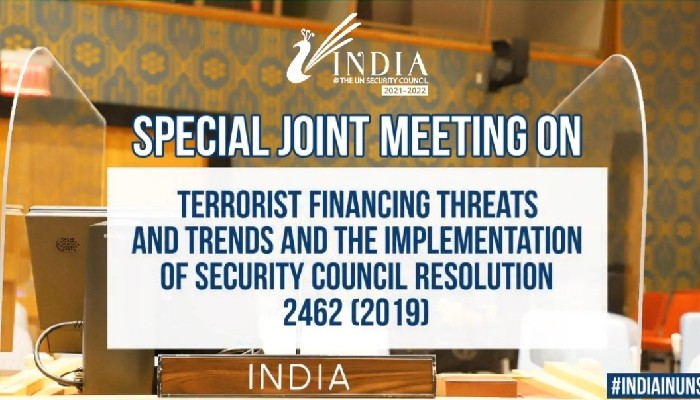 India has appealed to the international community to call out the states who willfully provide assistance, safe havens to terrorists and hold them accountable.

The country's stand was articulated at a UN meeting on Thursday, where India's representative noted that the continuous expansion of terrorist groups was a reality check for all.

India’s statement was made by First Secretary, India's Permanent Mission to UN, Rajesh Parihar at the Joint special meeting of the Counter-Terrorism Committee and the ISIL (Da’esh) and Al-Qaida Sanctions Committee on ‘Terrorist-financing threats’.

“Continous expansion of terrorist groups is a reality check for all of us that despite Security Council resolution 2462 to counter the financing of terrorism (CFT), its implementation by member states remains challenging for reasons including the lack of political will,” Parihar said in his statement.

“India is steadfast in its commitment to Counter Financing of Terrorism (CFT) and has developed over the last few decades the necessary capabilities, legal frameworks, institutions, best practices to CFT. India took measures to bring its financial sectors to international standards, including those of FATF,” he mentioned.

“While India is committed to support and strengthen UN efforts to assist member states lacking CFT capacities by providing financial support, it calls on the international community to call out the states who willfully provide financial assistance, safe havens to terrorists and hold them accountable,” the Indian First Secretary stated.

“Recent trends- besides the traditional ways of terror-financing- including through transnational organized crime, trafficking, etc. emergence of new financial and payment technologies and methods have enabled terrorist groups to exploit them for collecting and transferring funds,” he added.

“The Global Implementation Survey of resolution 1373, adopted by CTC on November 4, and FATF’s latest report (October 2021) on ‘Jurisdictions under Increased Monitoring’ highlights the continued terror-finance risk due to lack of action by a country in our neighbourhood,” he informed.

“Effective multilateral approach to CFT, built on PPP to identify and mitigate new terror-financing risks, strengthening support to financial watchdogs such as FATF to ensure that member states bring their counter-financing structures at par with international standards are needs of the hour today,” the Indian diplomat said.
Attachments area