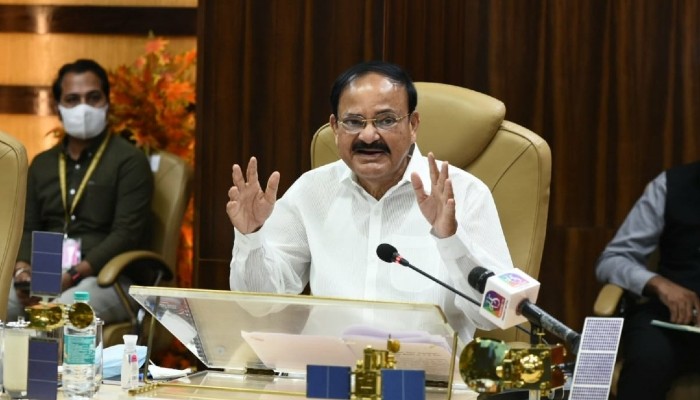 Vice President M Venkaiah Naidu described ISRO as the pride of the nation.

India had become a world leader in the niche area of satellite-based remote sensing services, he said

Highlighting India's huge potential to expand its footprint globally in the space sector, Vice President M Venkaiah Naidu has suggested that ISRO should give a thrust to the indigenously-developed regional navigation satellite system NaVIC for global use.

The Indian Space Research Organisation (ISRO) should actively pursue the expansion of the NaVIC system in terms of areas covered, services offered and its effective utilization to meet the national requirements, he said on Wednesday.

Addressing scientists and staff of the U R Rao Satellite Centre, Vice President Naidu
complimented ISRO for establishing and putting in operation NaVIC and termed it as a significant achievement.

He also urged the recently-launched Indian Space Association (ISpA) to contribute in a big way to make India totally self-reliant and a global leader in the space arena.

He appreciated ISRO for its leadership role in incubating Indian private entities by enabling them to participate in space-related activities.

“I am sure the impressive track record of ISRO in building the knowledge base and space assets over the years will be leveraged to multiply the benefits to the nation with the participation of private players”, he added.

The Vice President also pointed out that India had become a world leader in the niche area of satellite-based remote sensing services.

VP Naidu added that the data from the meteorological payloads operating in various satellites facilitate forecasting of weather including drought, severe rainfalls and cyclones.

The Vice President expressed confidence that ISRO woukd continue to conceive and build advanced on-board systems to deliver the required data. “This will further improve weather forecasting which will help farmers and enable us to better manage natural calamities”, he added.

Describing ISRO as the pride of the nation, the Vice President said the organization is respected globally for its outstanding achievements in the field of space research.

“Over the years, ISRO has made invaluable contribution to the nation’s progress by building more than 100 state-of-the-art satellites for various applications and also establishing operational launch vehicle systems like PSLV and GSLV”, he noted.
Attachments area