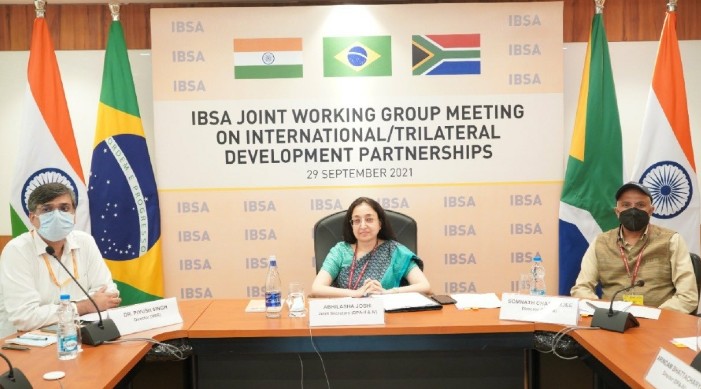 The IBSA Joint Working Group Meeting on International and Trilateral Development Partnerships was held on Wednesday.

The inaugural meeting of development cooperation agencies of India-Brazil-South Africa (IBSA) partner countries was held on Wednesday under the ongoing chairship of India.

Discussions were held on furthering South-South Cooperation with outlining of next steps, MEA Spokesperson Arindam Bagchi said on Twitter.

The grouping was formalized and named the IBSA Dialogue Forum when the Foreign Ministers of the three countries met in Brasilia on June 6, 2003 and issued the Brasilia Declaration.

Five IBSA Leadership Summits have been held so far. The 5th IBSA Summit was held in 2011 in Pretoria.

IBSA’s success demonstrates, most vividly, the desirability and feasibility of South-South cooperation beyond the conventional areas of exchange of experts and training.

India as the current IBSA Chair has planned to convene the 6th IBSA summit under the theme ‘Democracy for Demography and Development’ in 2021.

The two-day event was hosted by the Research and Information System for Developing Countries (RIS), an autonomous think-tank of the Ministry of External Affairs, Government of India.

It featured a conversation with IBSA Sherpas on economic partnerships that will, among other things, help economic integration and cooperation in creating resilient value chains post-Pandemic, accelerate the digital and green transition processes.