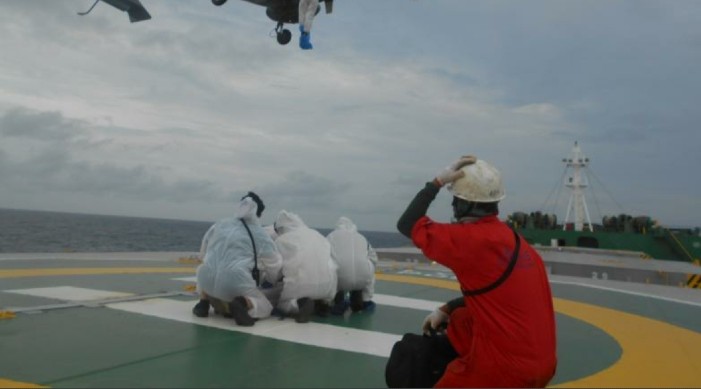 The operation being carried out off the Kochi coast.

An Advanced Light Helicopter was used for the medical evacuation

The Indian Navy and Coast Guard have rescued a Phillipino male crew member of a merchant vessel who was suspected to be Covid-19 positive.

The crew member, who was evacuated from onboard the vessel off Kochi in Kerala on Tuesday, is being treated at the Indian Navy hospital INHS Sanjivini.

The merchant vessel MV Lyric Poet was enroute from Gibraltor to Machong.

Providing details of what was described as "a swift coordinated operation", the Ministry of Defence on Wednesday said the medical evacuation on the high seas was undertaken by the Headquarters Southern Naval Command (SNC) using an Advanced Light Helicopter (ALH).

The evacuation exercise was launched after SNC received information regarding a suspected Covid-19 positive case of a Phillipino male crew member from the Coast Guard Headquarters at about 4 pm on Tuesday.

The Merchant Vessel's (MV) local agent had informed that the medical condition of the Chief Officer Michel John Abaygar was severely deteriorating with depleting oxygen levels and that he required immediate medical evacuation, the defence ministry said.

An ALH was immediately launched from INS Garuda to undertake the Medical Evacuation (MEDEVAC).

"The pilots of the helicopter displaying tremendous skill and professionalism successfully completed the mission in adverse weather conditions and ensured safe evacuation of the patient," the defence ministry said.

The patient was brought to INS Garuda and transferred to the Naval Hospital, INHS Sanjivini, for further medical assistance adhering to all Covid-19 protocols.