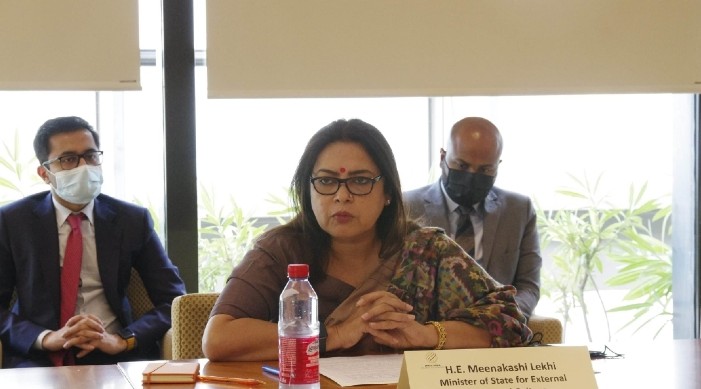 India has taken up 98 connectivity projects worth USD 7 billion dollars in five countries, Minister of State for External Affairs Meenakshi Lekhi has said.

Of these, 44 projects have already been completed, including the Railway Bridges and Signalling Systems in Bangladesh and the post-war rebuilding of the Sri Lankan Railways.

These projects were in recognition of the need for robust multimodal connectivity in India's immediate neighbourhood, Lekhi said while addressing the Spain-India Council Foundation on Thursday.

Interacting with important stakeholders from India and Spain during the hybrid event, she highlighted India's human-centric development assistance with a focus on local capacity building.

She noted that India's development assistance used a mix of multiple instruments, including grant-in-aid, line of credit and capacity building and technical assistance.

"Projects that are fully-financed by grants are the most important elements in our development cooperation portfolio. Currently, projects worth over USD 4 billion in the infrastructure, hydroelectricity, power transmission, agriculture, education, health and industrial sector are under implementation," the MoS External Affairs said.

Lekhi noted that India's development assistance to Afghanistan is over USD 3 billion, with projects in nearly all of the country´s provinces.

"We have set up the first ever industrial units in many countries – like the first Cement Plant of Djibouti, the first Milk Processing Plant of Mauritania and the first Sugar Factory of Ghana. India is currently building the first oil refinery of Mongolia through concessional loans worth USD 1.24 billion dollars," Lekhi noted.

According to MoS Lekhi, India's development cooperation is primarily human-centric. It is marked by respect, diversity, care for the future, and sustainable development.

"We focus on building local capacity and creating local opportunities. India’s development cooperation does not come with any prescriptive nor extractive conditions. We believe in projects that are viable, transparent, and which do not contribute to debt," she explained.

India deploys its development assistance resources through a mix of multiple instruments, including grant-in-aid, line of credit and capacity building and technical assistance.

"Projects that are fully-financed by grants are the most important elements in our development cooperation portfolio," Lekhi said.

She pointed out that the projects through Lines of Credit (LoC) on concessional terms have been successful in bringing into reality commercially viable projects while also building local project management capacities in diverse areas of socio-economic development such as power, transport connectivity, agriculture and irrigation and manufacturing industries.

Currently, 311 LoCs in 64 countries worth USD 31.54 billion are being implemented. As of date, 657 projects have been covered under the LoC process, Lekhi noted.

"Our restoration footprint spans over two dozen countries. 60 projects, valued at USD 46 million have been completed in 21 countries. 52 projects are on-going or planned in 12 countries at the cost of USD 120," she said.