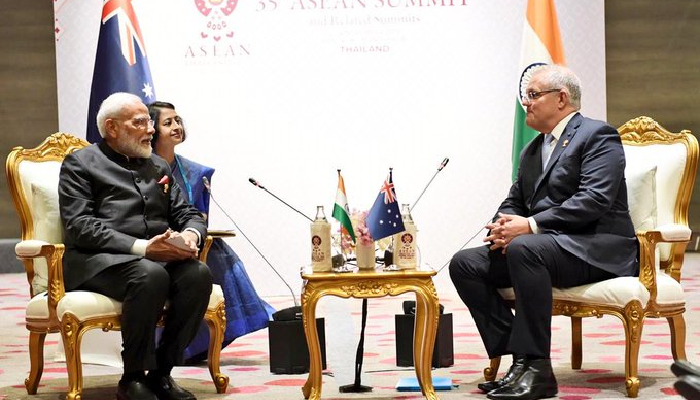 Prime Minister Narendra Modi on Wednesday talked to his Australian counterpart Scott Morrison and reviewed the rapid progress in the India-Australia Comprehensive Strategic partnership, including through the recent two plus two Dialogue.

Tweeting about it, the Prime Minister said: “Was happy to speak with my friend @ScottMorrisonMP. We reviewed the rapid progress in the India-Australia Comprehensive Strategic Partnership, including through the recent 2+2 Dialogue. We also exchanged perspectives on regional developments and the forthcoming Quad meeting.”

This was the first two plus two Ministerial Dialogue between the two countries, which took place following the elevation of India-Australia bilateral relations to Comprehensive Strategic Partnership during the India-Australia Leaders’ Virtual Summit on June 4, 2020

During the Dialogue, the two-side had in-depth and wide ranging discussion on bilateral and regional issues. Their discussion also included institutional frameworks for wide ranging collaboration in defence cooperation and fight against pandemic. They also exchanged their views on Afghanistan, Maritime Security in the Indo-Pacific and cooperation in multilateral format.

Significantly, talks between Prime Minister Modi and his Australian counterpart Morrison have taken place ahead of first in-person leadership meet of Quad in Washington DC on September 24.

Developments in Afghanistan, the COVID-19 pandemic and ways to expand cooperation for a free, open and inclusive Indo-Pacific are set to be the central focus of the Quad meeting which will be attended by Prime Minister Modi.