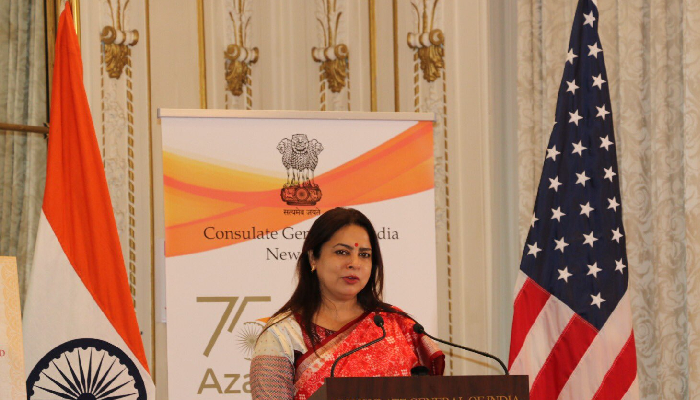 Minister of State for External Affairs Meenakashi Lekhi will pay an official visit to Portugal and Spain from September 12 to 17, 2021, the Ministry of External Affairs said in a statement on Saturday.

According to the MEA, during her visit to Portugal from September 12-14, MoS Lekhi will have bilateral talks with her counterpart Secretary of State for International Affairs and Cooperation Francisco Andre.

She will also meet Foreign Minister of Portugal Augusto Santos Silva and Secretary of State for Internationalization Eurico Brilhante Dias in the Ministry of Foreign Affairs. A bilateral agreement on the recruitment of Indian citizens to work in Portugal will be signed during the visit.

As per the MEA, the MoS would also meet the Minister of Culture of Portugal, Graça Maria da Fonseca and the Executive Secretary of the Community of Portuguese Language Countries (CPLP), Zacarias da Costa.

India was admitted as an Associate Observer of CPLP in July 2021 and is committed to deepen its historic relations with the Lusophone countries.

She will also meet members of the Indian community and attend an event marking the rich cultural heritage of India as part of the Azadi ka Amrit Mahotsav celebrations.

In the second leg of her two-nation trip, she will land in Spain on September 15 on a three-day visit. During her visit, as per the MEA, MoS Lekhi will hold discussions with her counterpart, Secretary of State for Foreign Affairs Ángeles Moreno Bau and meet other senior dignitaries in the Spanish government.

The MoS will also inaugurate ‘The Beatles and India’ exhibition at Casa de la India, Valladolid and deliver a talk on India's Development Cooperation at the Spain India Council Foundation.

She will also interact with Indologists and Indophiles, including ICCR Alumni, and the Indian Community in Spain.

India enjoys warm and friendly relations with both Portugal and Spain. The visit of the MoS, which is the first in-person official engagement with both countries since the Covid19 pandemic, is expected to provide fresh momentum to bilateral ties.