‘As members of Quad, India and Australia recognize importance of plurilateralism’: Jaishankar 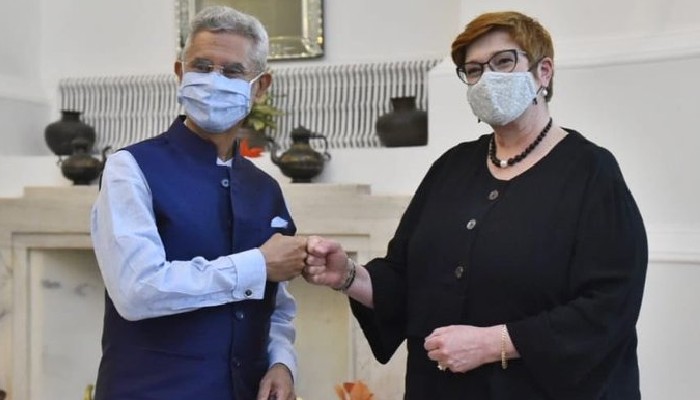 India and Australia reiterated their commitment for peace, stability and prosperity of all countries in the Indo-Pacific region.

Speaking to the media after the first two plus two ministerial dialogue, External Affairs Minister S Jaishankar said India and Australia are also committed to a rules-based international order, freedom of navigation in international waters, promoting connectivity as well as respecting territorial integrity and sovereignty of all states.

On Afghanistan, he said India and Australia agreed that guided by UNSC Resolution 2593, the international community must be united in its approach towards the war-ravaged nation.

In this regard, the EAM informed the media about the 9/11 incident held 20 year ago.

Talking about it, he said the incident “is a reminder-if one is still needed-of the importance of combating terrorism without compromise. Close as we are to its epicenter, let us appreciate the value of international cooperation.”

The EAM said India and Australia as members of the Quad recognize the importance of plurilateralism in a multipolar and rebalanced world.

“We appreciate the value of our trilaterals with Japan, France and Indonesia and will hold these dialogues soon,” Jaishankar said, adding discussion was also held on the on-going cooperation in the multilateral arena for preserving the rules-based international order.

The two sides, according to EAM Jaishankar also touched upon issues like decentralized globalization and strategic autonomy. They also reiterated their commitments to creating secure and resilient global supply chains.

“We welcomed the renewed vigour with which both sides are now engaging on trade issues to fully expedite the complementarities between us,” the EAM said.

India and Australia also discussed their experiences on handling Covid-19 pandemic and sought collaboration in responding to the Covid-19 challenges.

The EAM further informed that during the meeting, he specifically took up with Australian Foreign Minister Payne the problems faced by Indian students in Australia and those wishing to go to Australia.

“I urged that the difficulties faced by the students due to travel restrictions be sympathetically addressed as soon as possible,” he said.