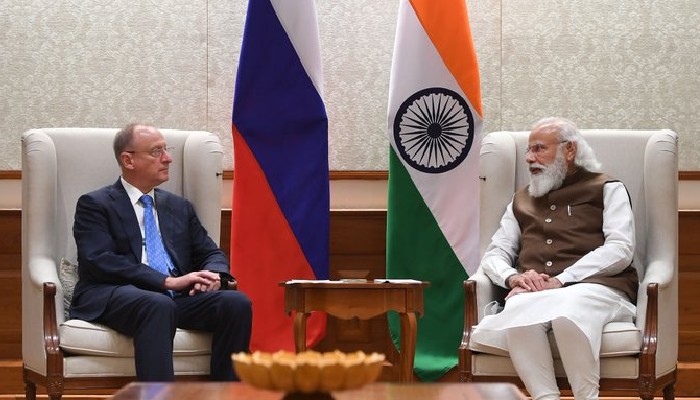 Secretary of the Security Council of Russia, Nikolai Patrushev with PM Modi in New Delhi on Sept 8

Secretary of the Security Council of the Russian Federation, Nikolai Patrushev on Wednesday called on Prime Minister Narendra Modi and expressed Russia’s strong commitment to further deepen its ‘Special and Privileged Strategic Partnership’ with India.

The Russian NSA briefed PM Modi about his fruitful exchanges with NSA Ajit Doval and EAM S Jaishankar earlier in the day.

According to the Ministry of External Affairs, Prime Minister Modi expressed his appreciation for the visit of the Russian delegation led by Secretary Patrushev at a time when major changes are taking place in the region.

Prime Minister Modi asked Secretary Patrushev to convey his thanks to President Putin for his constant attention towards the India-Russia Partnership.

He also said that he was looking forward to welcoming President Putin in India in the near future, for the bilateral summit.