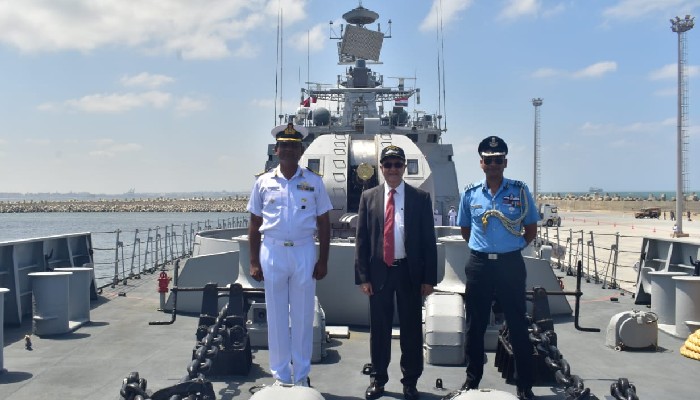 Ajit Gupte, Indian ambassador Egypt, standing in the middle of naval officials on board INS Tabar

Continuing with the Indian Navy’s practice to deploy Indian warships for overseas exercise, INS Tabar entered Alexandria harbour in Egypt on Friday, a statement issued by the Ministry of Defence on Sunday said.

The ship was received by officials from the Egyptian Navy and the Indian Defence Attache.

Ajit Gupte, Ambassador of India to Egypt paid a visit to the ship and was provided a walk around and briefing on activities related to the ship's deployment.

Later, in the evening, a reception was hosted onboard, for which Rear Admiral Ayman al-Daly, Commander of Alexandria Naval Base, was the Chief Guest.

The event was attended by a number of senior officers from the Egyptian Navy, the Alexandria government and a large number from the Indian diaspora.

In addition, Commanding Officers and officers of Hellenic Navy ships Hydra and Lesbos and Cyprus Navy ship Andreas Loannides, which are visiting Alexandria for “Exercise Bright Star” with Egypt, were also present for the reception