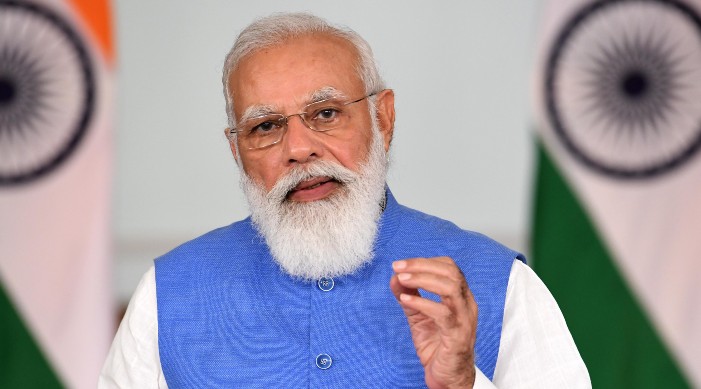 PM Modi addressing at the plenary session of EEF through video conferencing, in New Delhi on September 03, 2021.

Prime Minister Narendra Modi on Friday called for greater economic and commercial engagement between India and Russia in line with the ‘Special and Privileged Strategic Partnership.’

He said this while delivering a video-address during the plenary session of the 6th Eastern Economic Forum held in Vladivostok, where he was the first Indian Prime Minister to address the forum as the Chief Guest in 2019.

In his address, the Prime Minister highlighted health and pharma sectors as important areas of cooperation that have emerged during the pandemic.

He also referred to other potential areas of economic cooperation including diamond, coking coal, steel and timber.

Recalling the visit of Chief Ministers of Indian states to EEF-2019, PM extended an invitation to Governors of the 11 regions of Russian Far East to visit India.

Applauding President Putin’s vision for the development of the Russian Far East, PM reiterated India’s commitment as part of its ‘Act East Policy’ of being a reliable partner of Russia in this regard.

He underlined the natural complementarities of India and Russia in the development of the Russian Far East.

Despite the challenges of Covid-19 pandemic, an Indian delegation led by Minister of Petroleum and Natural Gas Hardeep Singh Puri comprising leading Indian oil and gas companies is attending the India-Russia Business dialogue within the framework of EEF.

An online meeting between Chief Minister of Gujarat Vijay Rupani and Governor of Sakha-Yakutia province of Russia was held on September 2 on the sidelines of EEF. Over 50 representatives from reputed Indian companies from various sectors will also be participating in an online format.