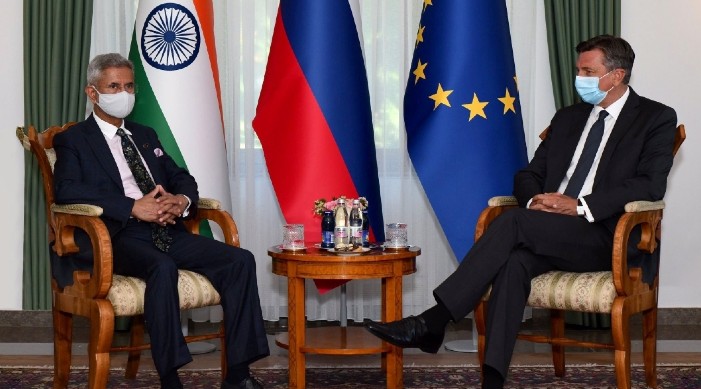 Slovenia currently holds the Presidency of the Council of the European Union and has invited the EAM to attend an informal meeting of the Ministers of Foreign Affairs of EU Member States on Friday.

Jaishankar in a tweet thanked President Pahor for his gracious welcome.

“Thank Slovenia’s President @BorutPahor for his gracious welcome. Deeply appreciate his long standing support for our relationship. Discussed key challenges facing India and EU,” the EAM tweeted on Thursday after the meeting.

Earlier in the day, Jaishankar had an ‘Excellent meeting’ with Foreign Minister of Slovenia, Anze Logar, in which the two ministers had a ‘good exchange of views’ on Afghanistan and the Indo-Pacific.

“Excellent meeting with Foreign Minister of Slovenia @AnzeLog. Agreed to deepen our political and economic relationship. Welcome Slovenia's Presidency of EU and confident it will take India-EU ties forward. Good exchange of views on Afghanistan and the Indo-Pacific,” Jaishankar had said in the tweet.

On Thursday, Jaishankar also attended the Bled Strategic Forum (BSF) being held in Slovenia, and participate in the panel discussion on ‘Partnership for a Rules Based Order in the Indo-Pacific’.

“Joined colleagues of Slovenia, Portugal and Kenya-@AnzeLog, Augusto Santos Silva and @AbabuNamwamba at @BledStratForum to speak on Partnership for a Rules-Based Order in the Indo-Pacific,” the EAM said in another tweet.

Jaishankar is visiting Slovenia, Croatia and Denmark from September 2-5 to review the progress in India's bilateral ties with the three Central European countries. His visit will also provide an opportunity for strengthening the multifaceted relationship with the EU.

After being in Slovenia on September 2-3, he will visit Croatia on September 3 and will finally head towards Denmark in the last leg of his three-nation tour.