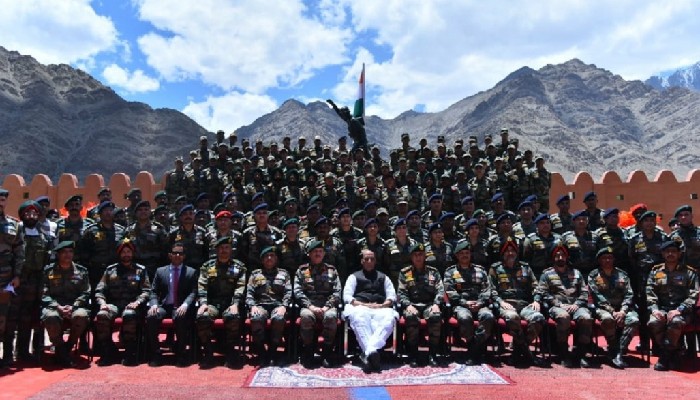 India is always prepared to give a befitting reply if provoked, Defence Minister Rajnath Singh said

Lauding the exemplary courage displayed by the Indian Army during the Galwan Valley incident in June last year, Defence Minister Rajnath Singh has said the country will never forget their sacrifice.

Singh stated that India is a peace-loving nation that never resorts to any kind of aggression, but at the same time, it is always prepared to give a befitting reply if provoked.

He was interacting with the officers and jawans of Indian Army’s 14 Corps at Karu Military Station on the second day of his three-day visit to Ladakh.

"Delighted to meet the brave and valiant soldiers of the Indian Army at Karu in Ladakh today. I salute their courage and fortitude," Singh said on Twitter.

On the night of June 15, 2020, 20 men from the Indian Army were killed in action during a violent face-off with the Chinese People's Liberation Army (PLA) in Eastern Ladakh's Galwan Valley area. A large number of Chinese soldiers had also died, though China has never released the number of casualties.

Providing details about his address, the Ministry of Defence said Singh reiterated the Government’s stand of resolving disputes through dialogue with neighbouring countries.

He, however, assured the nation that "safety and security of the nation will not be compromised at any cost".