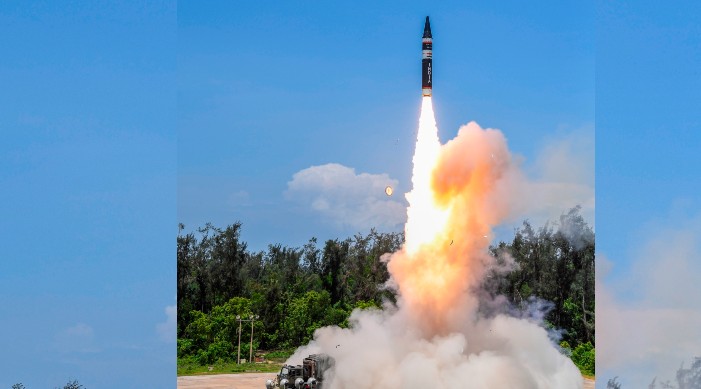 Agni P is a canisterised missile with range capability between 1,000 and 2,000-km

“Various telemetry and radar stations positioned along the eastern coast tracked and monitored the missile. The missile followed text book trajectory, meeting all mission objectives with high level of accuracy,” the Ministry of Defence said in a statement.

Agni P is a new generation advanced variant of Agni class of missiles. It is a canisterised missile with range capability between 1,000 and 2,000-km

The ballistic missile weighs 50 percent less than Agni III and has new guidance and a new generation of propulsion. Since the missile is canisterised, it can be launched from rail and road and stored for a longer period and transported all across the country as per operational requirements.

The missile, which has a range between 1000km to 2000km, can be used to target enemy armadas in the Indo-Pacific.

Twenty-five Enhanced Pinaka Rockets were launched in quick succession against targets at different ranges. All the mission objectives were met during the launches.

The enhanced range version of Pinaka Rocket System can destroy targets at distances up to 45-km.

Four enhanced range version of 122mm rockets were test fired with full instrumentation and they met the complete mission objectives.

These rockets have been developed for Army applications and can destroy targets up to 40-km.