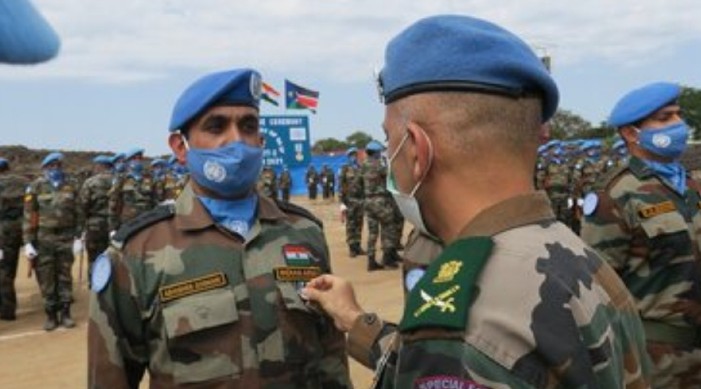 A UN peacekeeper in South Sudan being honoured with a medal.

Testifying to the camaraderie and close cooperation between the armed forces of India and Sri Lanka, far beyond their boundaries, Indian and Sri Lankan peacekeepers are serving alongside each other with the UN Mission in South Sudan (UNMISS).

The Indian peacekeepers, stationed at Bor, Pibor and at a temporary operating base in Akobo that are sensitive parts of South Sudan, have engaged in a variety of activities, including civil-military cooperation such as veterinary camps in different parts of the country.

The Sri Lankan peacekeepers who are from the Blue Berets aviation unit, carry out their relentless work despite two helicopters being shot in the past.

The Indian and Sri Lankan peacekeepers were selected from among troops belonging to various nationalities.
With 2,418 Indian and 686 Sri Lankan personnel, they jointly constitute more than 20% of the total strength of serving personnel in UNMISS, the Indian High Commission in Sri Lanka said on Thursday, highlighting their role.

Earlier this week, 135 Indian and 103 Sri Lankan peacekeepers serving in the mission were awarded medals, a recognition for their contribution at the hands of the UN Force Commander in Bor.

Recognizing the services by peacekeepers from the India and Sri Lanka, UN Force Commander Lieutenant General Shailesh Tinaikar congratulated them for ‘their contributions towards the fulfilment of the UNMISS mandate in this challenging environment’.

"My heartfelt congratulations to all these officers for their contributions towards the fulfilment of the UNMISS mandate in this challenging environment,” said Lieutenant General Shailesh Tinaikar, the peacekeeping mission’s Force Commander.

The Indian peacekeepers have - like anybody working in Jonglei State and the Greater Pibor Administrative Area of South Sudan - dealt with the often-violent reality in a volatile part of South Sudan, plagued by inter-communal violence.

Flooding and the resulting displacement of thousands of people have further complicated matters for the Indian peacekeepers.

“The price of peace is sometimes very high,” he added, a statement supported by the fact that India’s participation in a total of 49 peacekeeping operations across the world has cost 157 lives,” he stated.

“You have flown in the most difficult of circumstances. In the past, two helicopters have been shot down in this part of the country, but you have never let that stop you from carrying on with your vital work. You have been as brave and committed as one would expect pilots from your country to be,” said Force Commander Tinaikar.

It may be recalled that Government of India deployed multiple assets within hours from receiving a request from Sri Lanka to douse the fire on MV XPress Pearl and address environmental concerns.

India’s role as the ‘first responder’ in crises in the region was also on display during Operation Sagar Araksha I in September 2020 and the floods in Sri Lanka in May 2017.