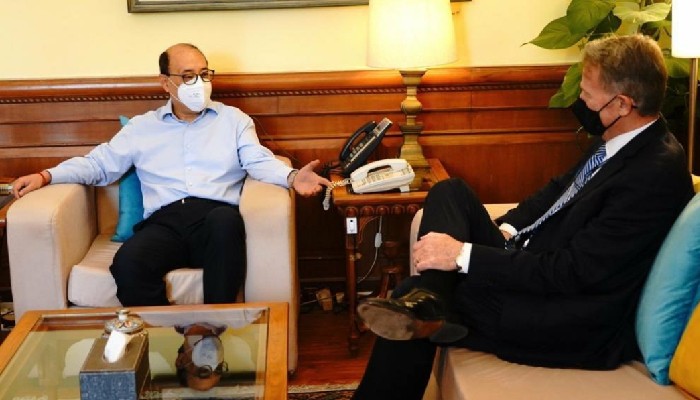 Cooperation in the United Nations was also discussed, the Ministry of External Affairs said

Foreign Secretary Harsh Vardhan Shringla on Wednesday had a productive meeting with Acting US Ambassador to India Daniel B Smith where the two sides discussed the Covid-19 situation including vaccines.

India-US relations, regional issues and cooperation in United Nations were also discussed when Smith called on the Indian Foreign Secretary.

In Washington DC, the EAM held productive discussions with US Secretary of State Antony Blinken on various aspects of Indo-US bilateral cooperation as well as regional and global issues.

A tweet by EAM Jaishankar on his meeting with Secretary Blinken had stated that deliberations on bilateral engagement and global and regional issues were fruitful covering Indo-Pacific and the Quad, Afghanistan, Myanmar, UNSC matters and other regional organisations.

The meeting also focused on Indo-US vaccine partnership aimed at expanding access and ensuring supply, he said while also appreciating the strong solidarity expressed by the US at this time.

Besides, the Quad was one of the key issues of discussion between Jaishankar and top officials of the Biden administration, including Blinken, Defense Secretary Lloyd Austin and National Security Advisor Jake Sullivan.